In 1930s there were two mosques and 14 Muslim shrines in Arabic city Ludd (Hebrew: Lod). Now both mosques continue to function, but 5 out of 14 shrines survived. 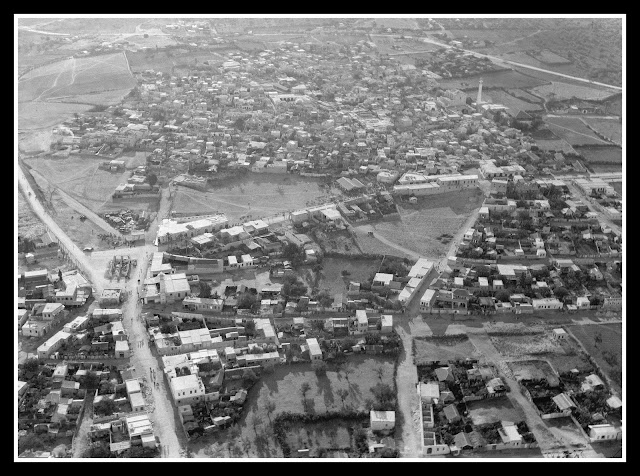 ‘Abd ar-Rahman ibn ‘Awf was one of the companions (ashabs) of Muhammad the Prophet. According to the tradition, he died in Medina and was buried in al-Baqi‘ cemetery. But the Muslims who lived in Palestine believed that Ibn ‘Awf was buried on their land, and they even built a mashhad (a shrine) in his honor to the east from the city of Ludd. An Arabic explorer Mudjir ad-Din mentioned this shrine (1496): “Near Ludd from the eastern side there is a mashhad, the the tomb of Abu Muhammad ‘Abd ar-Rahman ibn ‘Aouf, the companion [of Muhammad], a supporter who died in 32 of Hegira” (Sauvaire 1876, 211).

Now the mashhad  Ibn ‘Awf is on the territory of an old Muslim cemetery. Almost nothing left from the Mamluk's building. A modern Prayer house is built on its basement, and only a green dome of the survived shrine marks the place where the cenotaph of Ibn ‘Awf is. 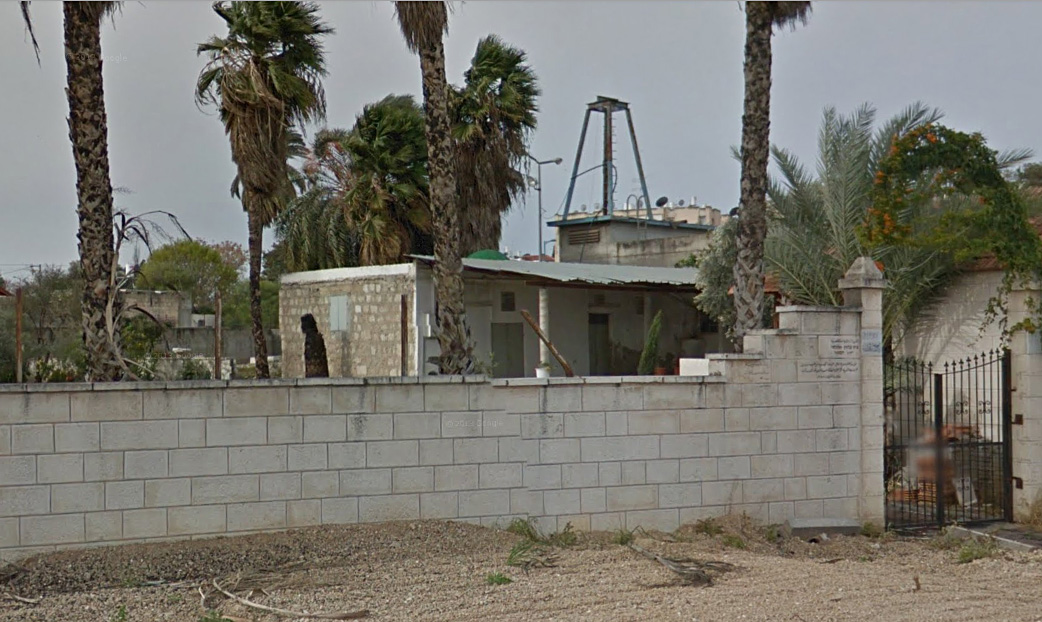 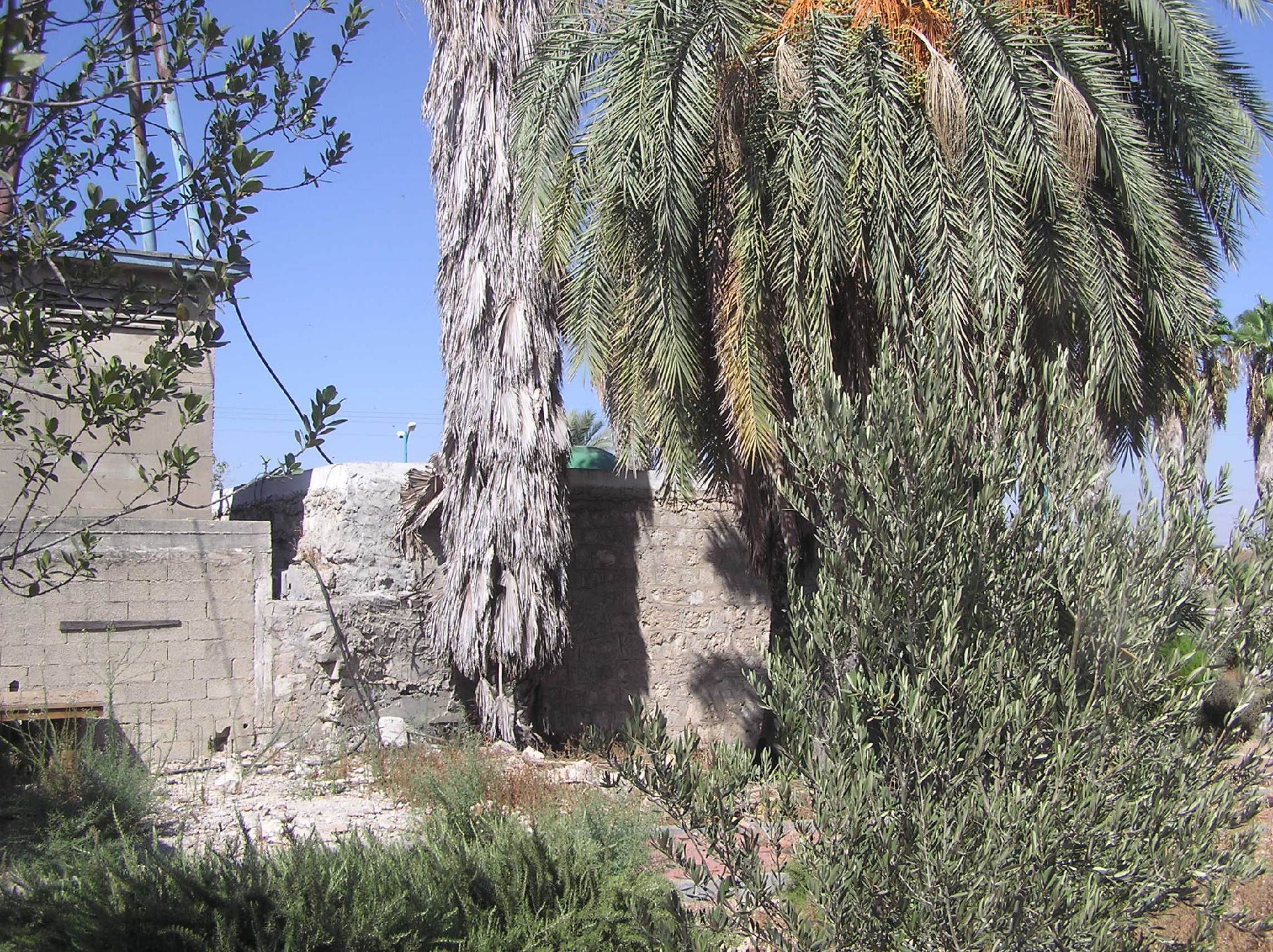 Route. This Muslim shrine is located in the eastern part of Lod, at the entrance to the city by Route 443 or via street ha-Hashmonaim.


In the center of Lod, on Hashmonaim street (Route 443) there is an old Muslim cemetery; very untidy and neglected, despite the fact that it is under protection. Near the entrance to the cemetery stands Maqam sheikh Ibrahim nearly all covered with ivy. Only the north wall with a wide arch doesn’t have ivy on it. A. Petersen visited the maqam in 1994 and described it so: “The maqam consists of a rectangular cross-vaulted structure (4m x 4m) with a small dome in the top. The east face is open and there are windows in the north and south sides. The outlines of a grave or cenotaph can be seen outlined on the floor. An inscription dated to 1119 H. (1706–1707 CE) on the exterior of the building states that this is the tomb of Shaykh Ibrahim Suwayq” (2001, 209).


The old Muslim cemetery of Lod 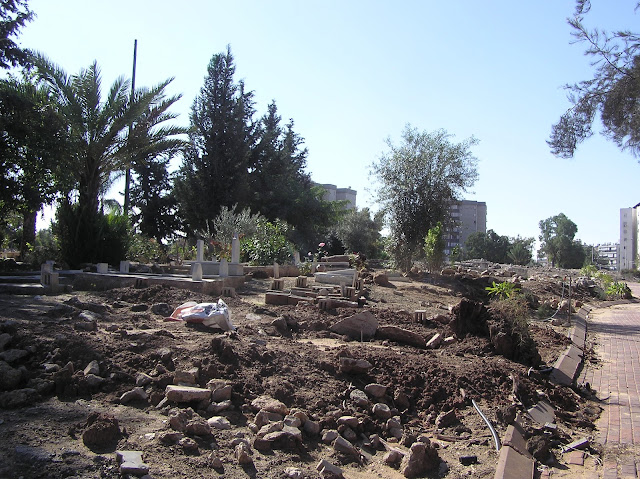 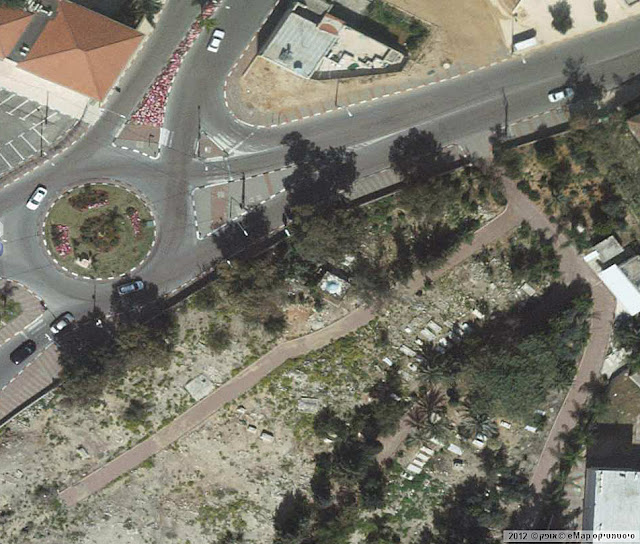 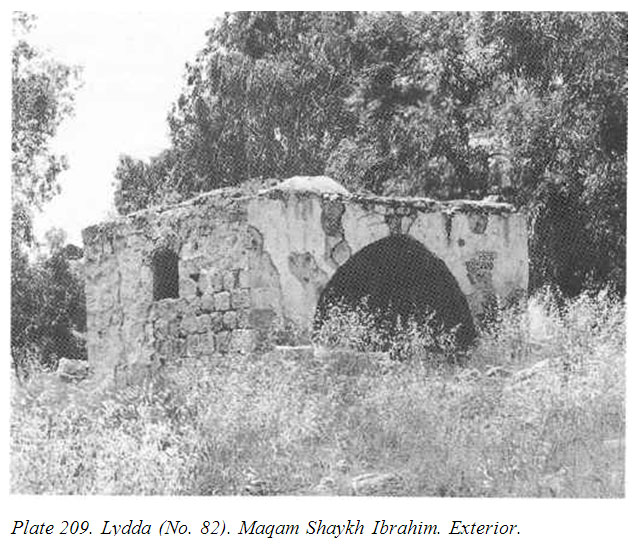 The exact dimensions of the structure are 4.66 x 4.50m. The entrance to the maqam is not on the east, but on the north-east side, where a wide arch is present. There is an inscription in Arabic on the north wall, however, to the right of the entrance. Dome of the maqam, apparently, completely covered with ivy. Note also that the tomb has no mihrab. Not so long ago the maqam was whitewashed and its floors were tiled. A modern tombstone with an inscription in Arabic “Muhammad al-Mabtuli” was installed instead of the cenotaph. Note that the Mosque of sheikh Ibrahim al-Matbuli (d. 1472), known even to researchers of the 19th century (Palmer 1881, 273; Stewardson 1888, 139), is located on the Tel Ashdod. 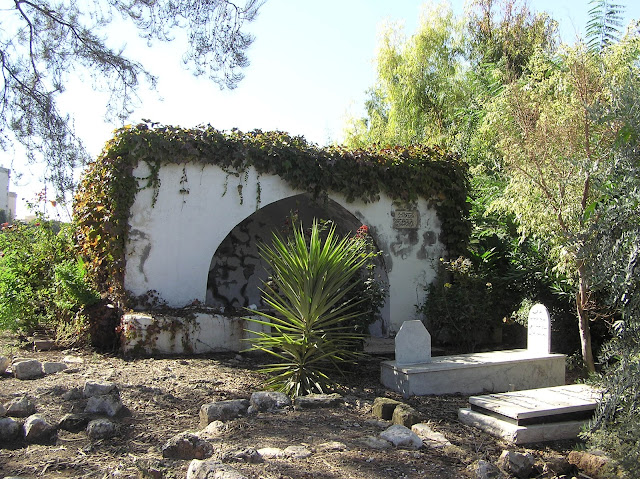 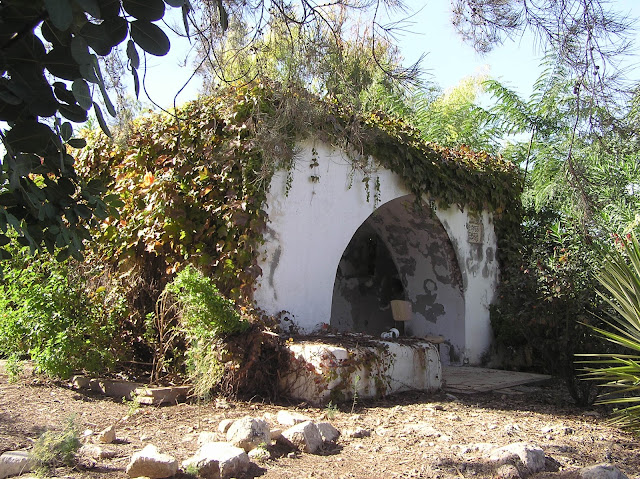 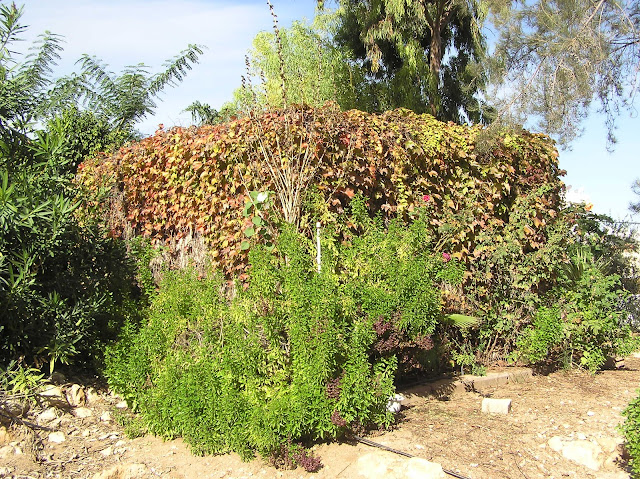 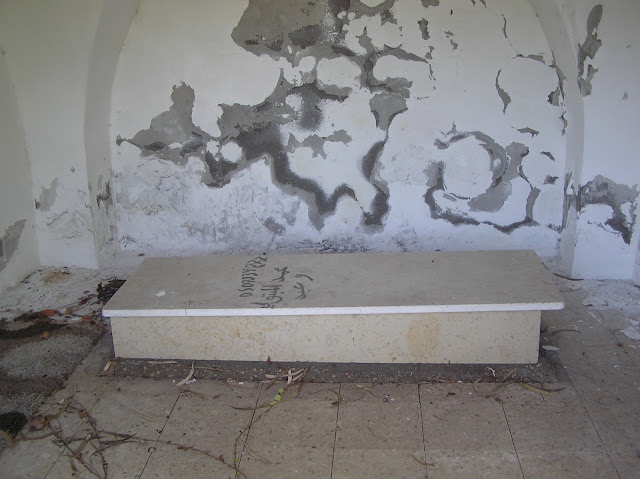 The researchers of the 19th century say that the Tomb of nabi Dannun is situated in the Muslim cemetery of Lod (Palmer 1881, 216; Stewardson 1888, 131). Do they refer to this particular object? Now it is hard to say. Somewhere around this place, on the east side of the road Ramla–Lod,


Standing in front of the maqam we asked a passing by Arab what the name of this object was. “The Sabba (grandfather) lies here”, — he said. On the British map of Ludd in 1931 this building is called the tomb of sheikh Muhammad al-Falih.

The structure is quite big: 7.20 x 10.20 m. It is 3.70 m high. To light a spacious dome room in the northern, western and eastern walls there made three rectangular and round small windows. The entrance in the north wall is now blocked with an iron locked door. There is no cenotaph in the maqam, but there is a rectangular mihrab in the south wall. A small half-round hole is in the east wall, with unclear purpose. 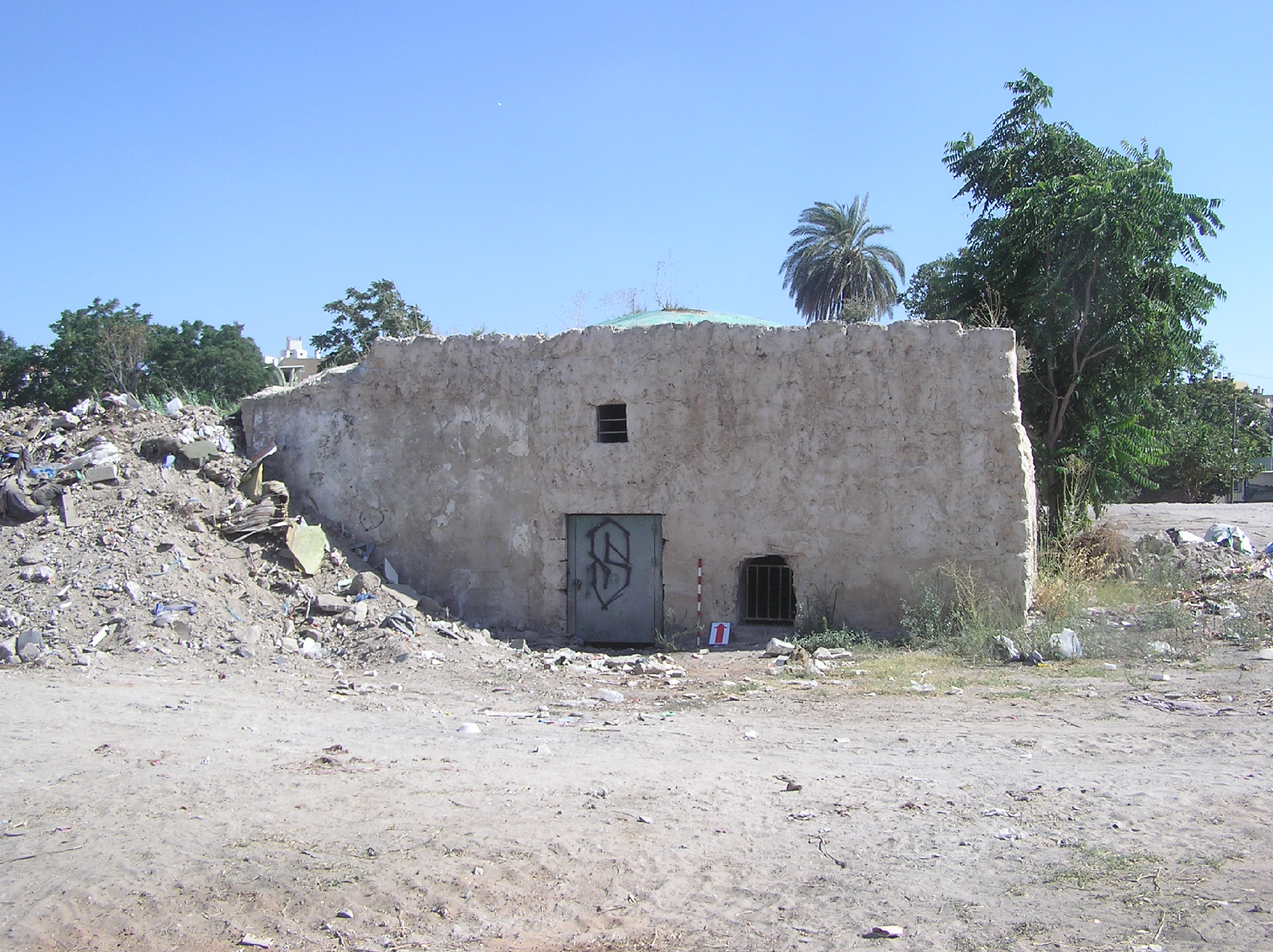 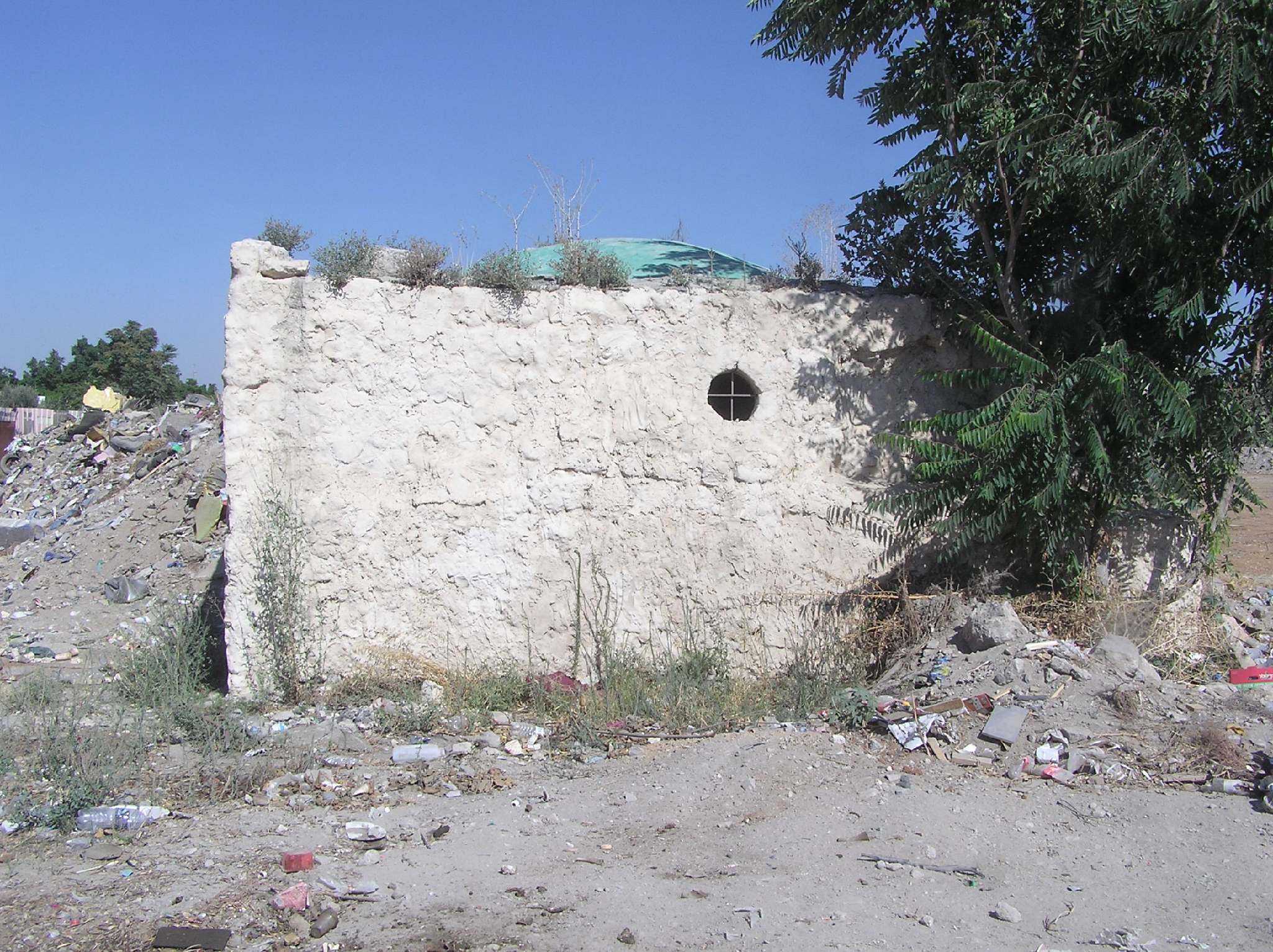 The maqam's interior. The mihrab 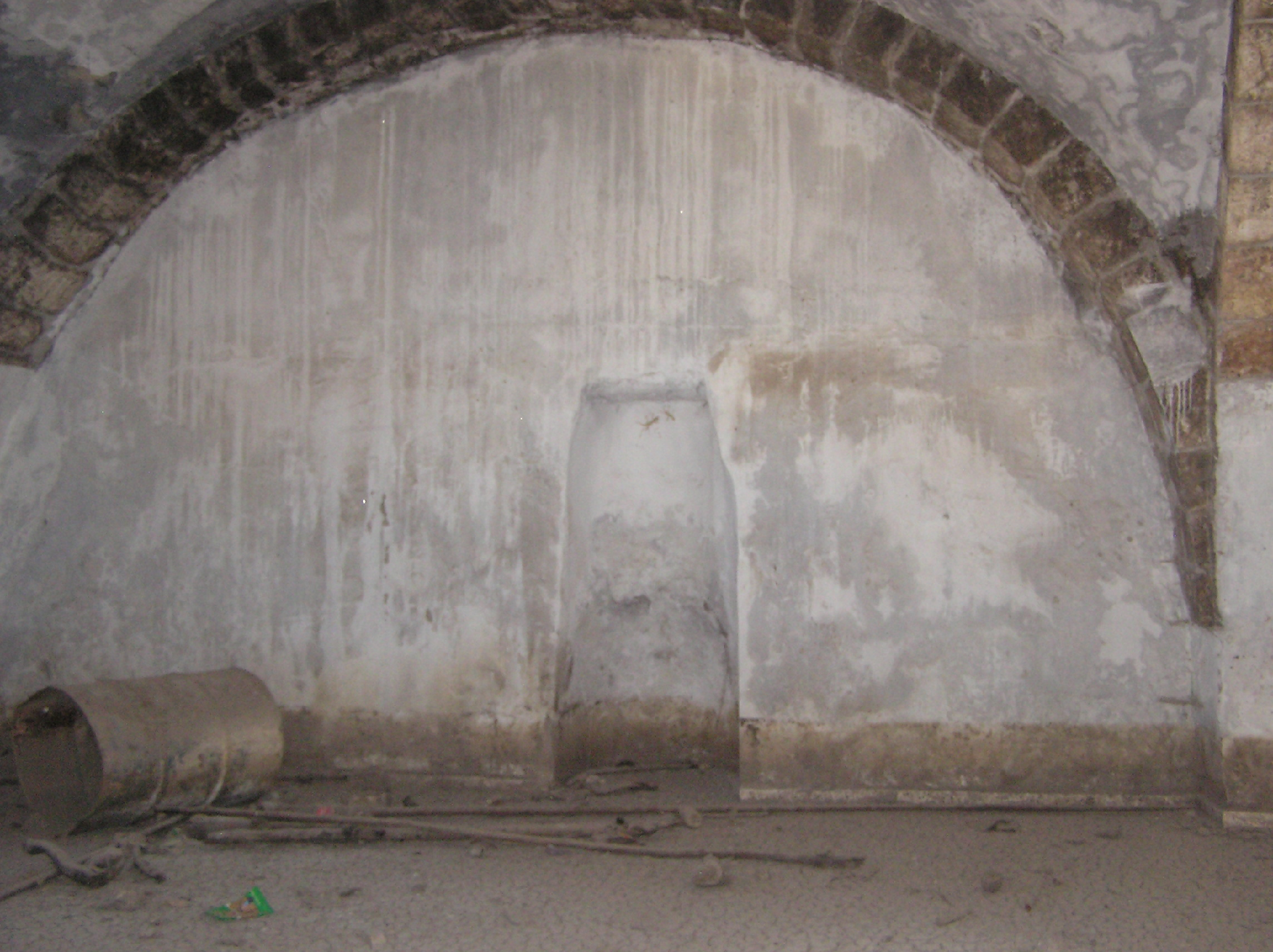 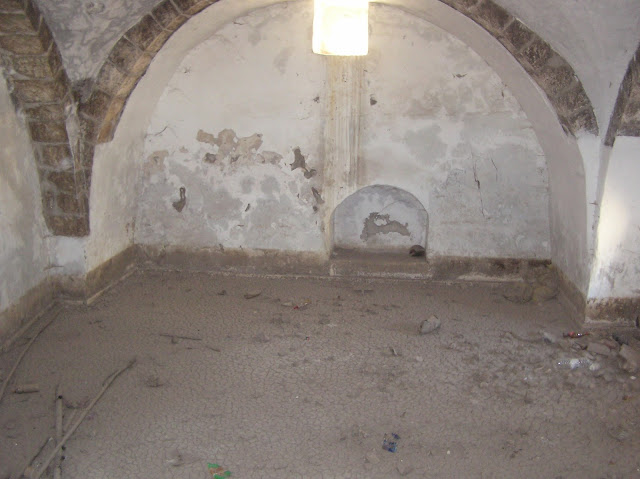 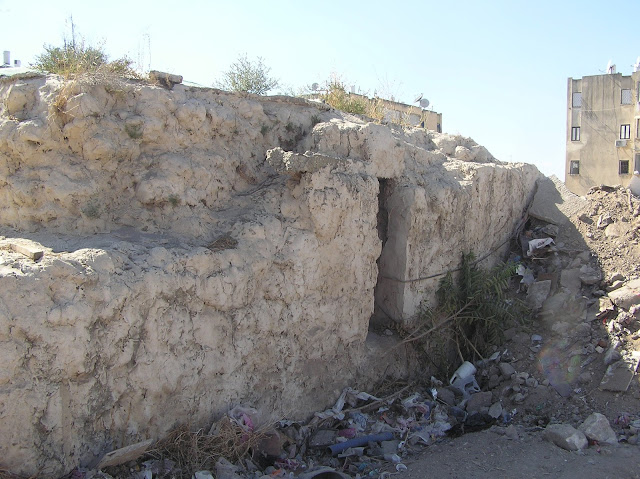 Being in the city, at the wasteland, the maqam is well observable. The Muslims keep on care for it and whitewash the outer walls and inner rooms. A low squatted dome is painted green. A nearby waste site causes some troubles to the monument with waste heaped at the east wall.

Route. The maqam is located inside the quarter, which borders to the Church of Saint George and mosque al-‘Umari to the east.


Salman al-Farsi (i.g. Pesian) was one of the companions (ashabs) of Muhammad the Prophet. He took part in Arabic captures of Palestine, Syria and Iraq. According to one legends, he was buried in Iraqi Madain, according to others – in Isfahan. However, in Palestine there are a few maqams named Salman al-Farsi. One of them was in Ludd. C. Clermont-Ganneau mentioned it (ARP II 471).

Today it is difficult to imagine how this maqam looked like. A square building is now on its place: a new brickwork lies on the previous one. The maqam was obviously rebuilt a few times and was used for different purposes. Now this building on be taken as a stone platform or an unfinished monument. 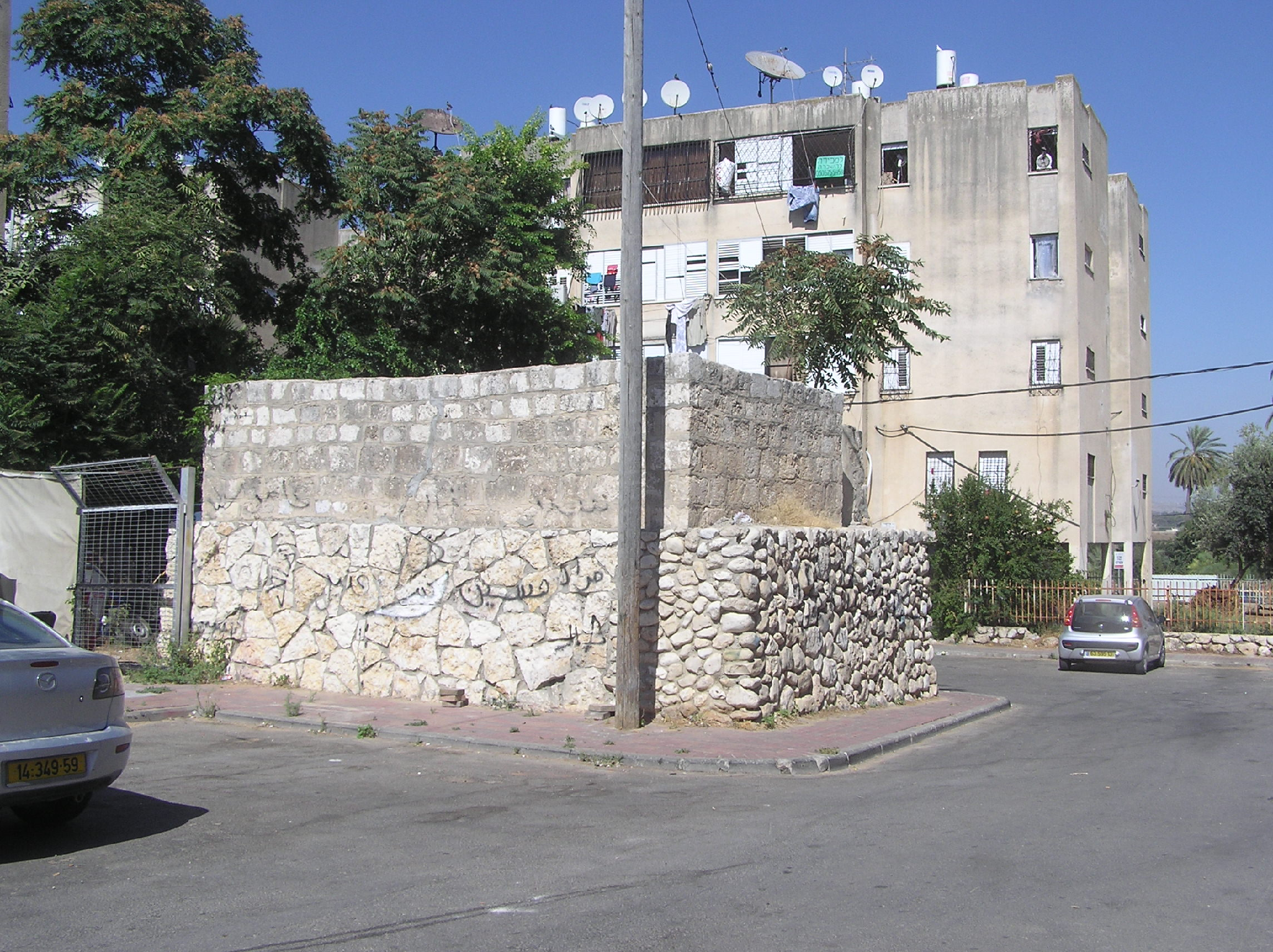 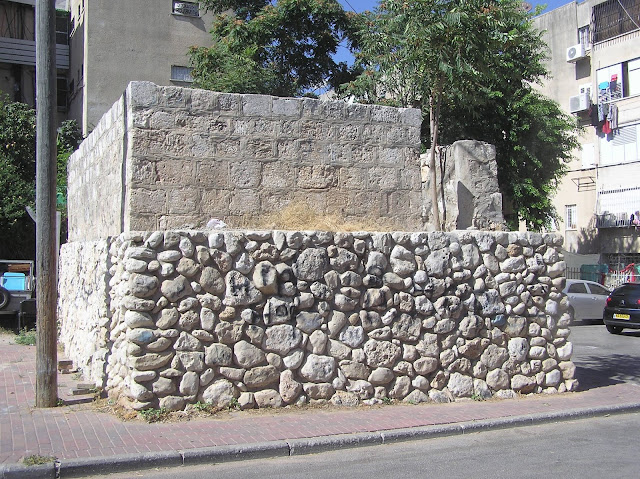 Route. The remains of the maqam are located on Sejera street in the eastern part of Lod, almost opposite an old Muslim cemetery with mashhad of ‘Abd ar-Rahman ibn ‘Awf (see above).


C. Clermont-Ganneau described the attractions of Arabic Ludda as follows,”To the south-east of the church there is an extensive open space called Bab esh-Sharky, "the eastern gate", in front of a beiyara (garden), likewise called esh Sharkiyeh, "the Eastern." This is the former site of Bab ed-Dajjal, "the gate of the Dajjal (Antichrist)." Just a few steps from here is the Jewish tomb mentioned by Sir Charles Wilson and Guerin. Beside this garden is the wely of Sliman el-Farsy, with its tomb. Close by is another wely, that of the Arba‘in M’ghazy (as who should say "the 40 martyrs"). A little further on, but still in the gardens, is the makam of the prophet En-Neby Mukdad; others say Sidna Mukdam, our "lord Mukdam." To the south-west of the mosque is the sanctuary of the prophet Neby Dannun, others say Sidna Zannun el-Masry, "our lord Zannun the Egyptian."” (ARP II 471).

Now only a few objects from the list survived. A well worshipped shrine of Arba‘in M’ghazy which stood near the maqam of Salman al-Farsi has completely disappeared. The latter can be also considered as lost. No trace is left from the tomb of nabi Dannun.

Luckily, the tomb of nabi Muqdam has survived. It is marked on the PEF map (Sheet XIII) to the east from old Ludd. Though, now it is not surrounded by gardens, but stands inside of a densely built complex near a workshop. Only the dome topped with a sharp spire is well observable. 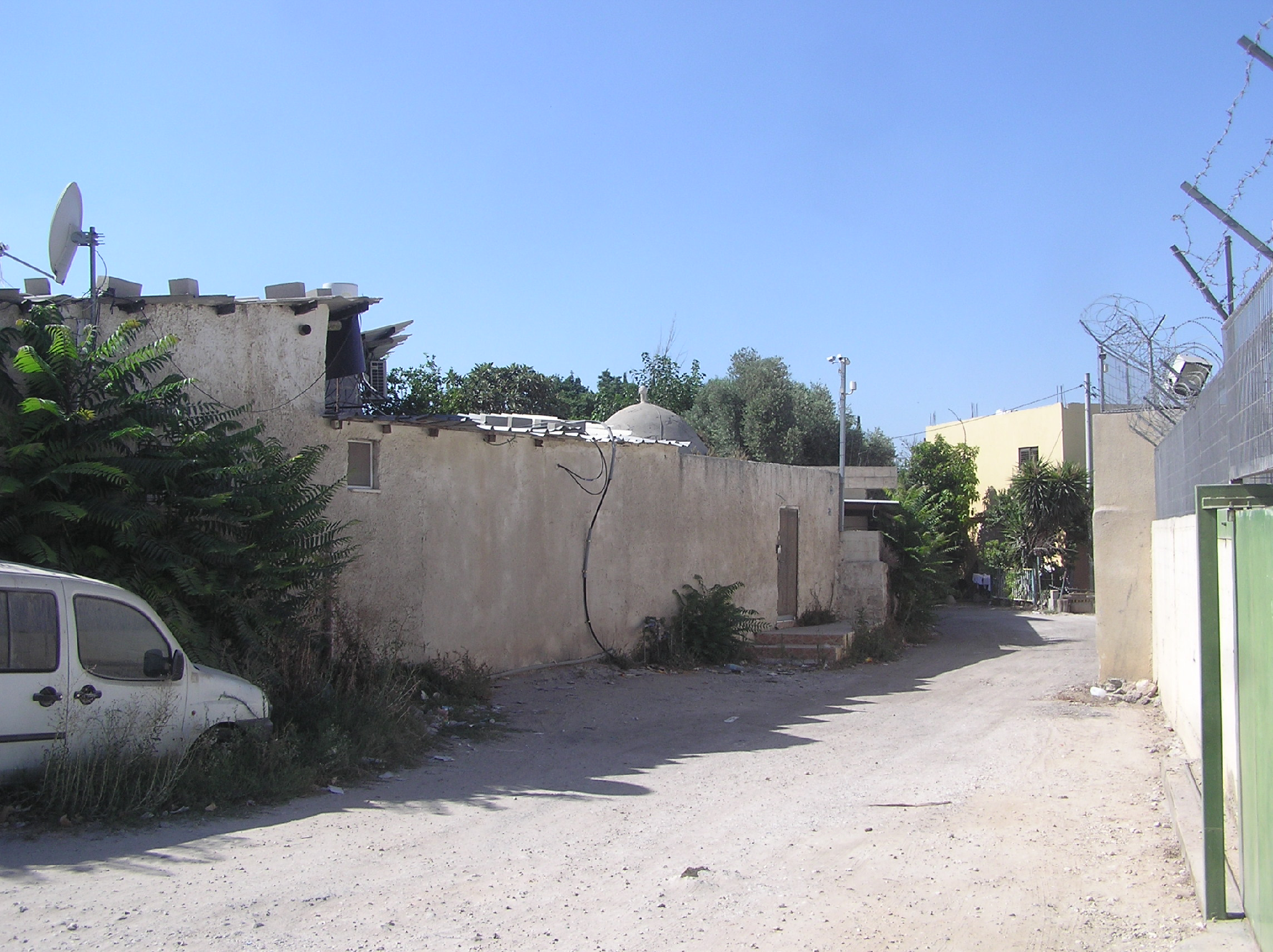 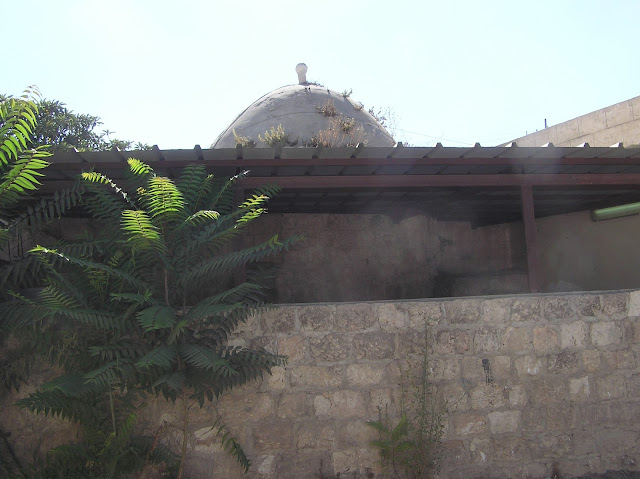 Route. You should look for the tomb of nabi Muqdam at the crossroad of Erez street and ha-Hashmonaim (Route 443). 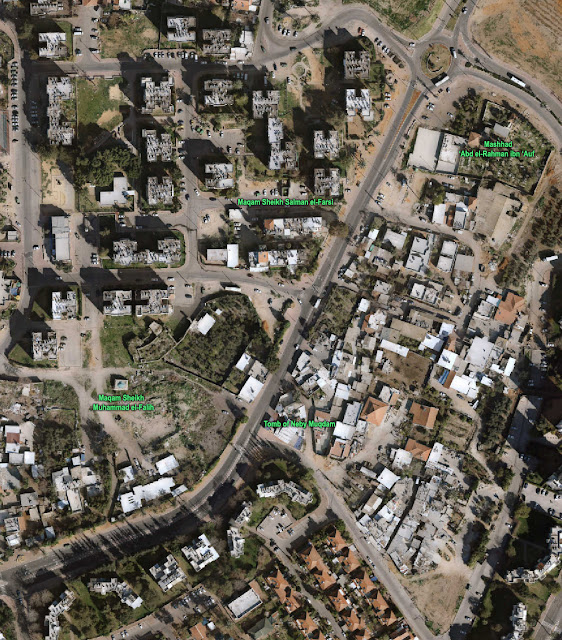 Posted by https://borisfenus.blogspot.com/ at 1:35 PM