The Palestinian monuments are remarkable for being much more durable than historic periods, epochs and even civilizations. Peoples and cultures change, they endow these monuments with their own narrative, completely different from previous. Things which were told about this or that site before, withdraw into the shadow or disappear. There is no doubt that this process will continue further, and something which is being told us today about a certain monument, will be said differently in the future.

In this article we will consider the cultural aspects of one of the most picturesque Palestinian mountains, which for centuries has been attracting travelers, researchers, and still keeps being in the center of attention. We will study different traditions concerning this mountain in their chronological order. The plenty of historical literature on this topic makes it possible to trace all the peripetias of the culturological process.


The Arabic tradition
South of Jerusalem 12 kilometres (7.5 mi) and south-east of Bethlehem 5 kilometres (3.1 mi) lies a picturesque cone-shaped volcanic mountain. At its top there are the ruins of an ancient fortress. The local Arab inhabitants call it almost poetically Jebel el-Fureidis (جبل الفرديس), which is usually translated as “the Mountain of the Little Paradise”. It might be taken as an earthly Paradise.

The author of this article visited this mountain in October, 2010, accompanied with an Israeli guide; and since that time he has been carefully taking the historical evidence about this landmark. 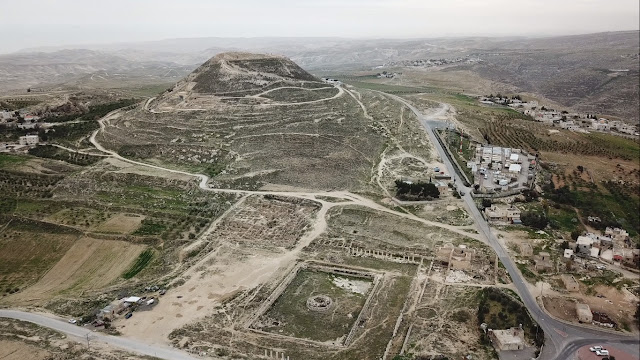 Jebel el-Fureidis nowadays. Now the mountain and the adjacent area make the Israeli National Park “Har Herodion” (הר הרודיון).
An Arabic word “el-Fureidis” is plural of “Firdous”, which means “paradise” or “the gardens” (Le Strange 1890: 439). This word has Persian roots adopted by the Arabs. In the Middle aged Damascus, the one of the city gates adjoined to the quarter with gardens were called “Faradis”. The people of Syria very often call the vineyards and the gardens by the name “Firdous”.

In his book, Nasir Khusraw told that in 1047 he went from Jerusalem to Hebron. “Along the road leading south you can see many villages surrounded by cultivated fields and gardens. Trees that do not need to be watered such as vines, fig trees, olive trees and sumach grow randomly and plentifully there. In two parasang distance from Jerusalem there is a place where you can see the spring, vineyards and gardens. The charm of this place gave it the name of Faradis" (1881: 98–99).

In the Middle Ages this area was one of the most picturesque and ambrosial places in Palestine. European travelers supported the words of Nasir Khusraw: “The name of "the Little Paradise," which the place still bears, may have arisen from the beauty of the gardens, no less than of the town (i.e. the remains of the buildings at the foot of the mountain)” (Geikie 1888: 242; Fulton 1900: 282). “The preserved man-made terraces to the north and north-west, at the foot of the mountain and its slopes bear evidence of the former tree and orchard crops” (Schick 1880: 89).

In 18th and 19th centuries European visitors wrote about the terraces on the slopes of Jebel el-Fureidis. These terraces are clearly visible in the drawing in the book of Richard Pococke dated 1745 (see below). Today, these terraces are nowhere to be seen: they were either filled up during Israeli archaeological excavations, or hidden by hiking trails and a spiral road leading to the top of the mountain.

The cone-shaped mountain towering in the middle of the gardens was visible from afar and inspired a reverent attitude towards itself. The Arabs monitored the condition of the mountain and protected it the best they could. In any case, when curious European guests climbed to the top and examined the ruins of the fortress, the local sheikh came himself or sent people to see that foreigners were not digging for treasure (Saulcy 1865: I 176). 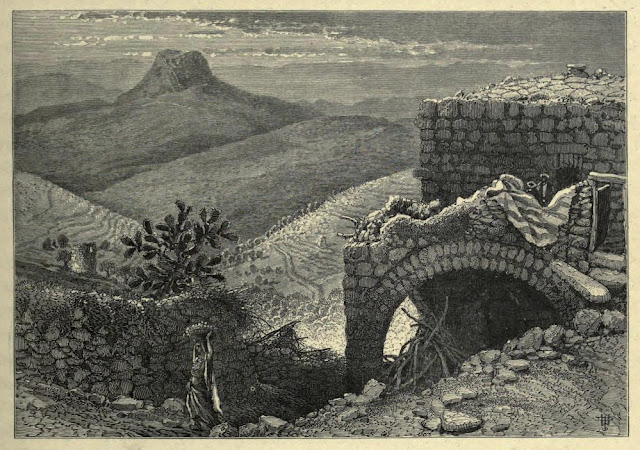 View of Jebel el-Fureidis from Bethlehem. 19th century drawing (Wilson 1881: I 137)
Sometimes it came to clashes between locals and foreigners. The Jesuit missionary Michel Nau describes such a scene in 1674: “A little more than one league from Bethlehem, we reached the foot of a high mountain, which is separated from all the others. I have heard that it is called the Mountain of Franks; but in the local village it is called Ferdays or Ferdaous, that is, Paradise. We rode the horses until the rise rate forced us to dismount to climb to the top. Then two or three Arabs, seeing us and not knowing that our company was headed by the [French] Ambassador himself, started shouting at us, forbidding us to go further. Seeing that no one was embarrassed by what they were shouting, they began to throw large stones from the top of that place, which jumped and rolled down the slope with frantic speed and would certainly have killed or knocked over whoever they hit. We managed to dodge them, and then our dragomen quickly rushed to them (to the Arabs), prevented them from continuing, and then we peacefully reached the peak” (1757: 439).

The locals acted this way, since they considered themselves as guardians of this sacred mountain, been called to protect it from the encroachments of foreigners and infidels. The harshness and ferocity with which fellahs sometimes defended their shrines was well known in Palestine and beyond.

Read more...
Posted by https://borisfenus.blogspot.com/ at 7:01 AM No comments: