Aerial photo of the Southern Wall of the Haram esh-Sharif. The dashed lines show the borders between the wall rows of different historical periods. The numbers mark different places of interest, which will be described below.

7. A Latin inscription on the ashlar

Near the Double Gate in the Southern Wall, in the Umayyad rows there is a reused stone block with the Emperor Antoninus Pius mentioned on it. A Latin inscription which is turned upside down and with regular abbreviations says: 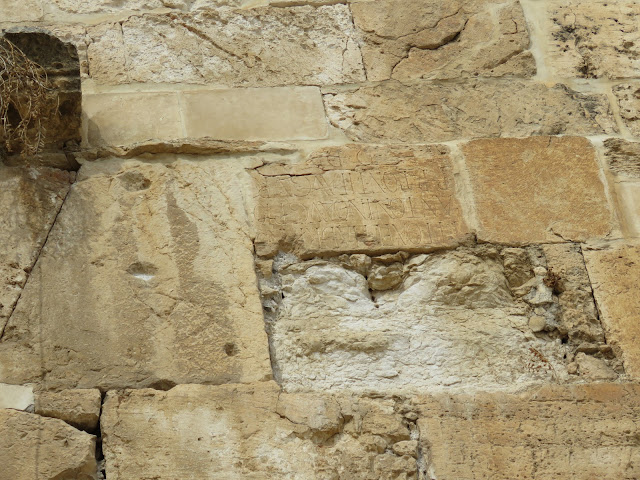 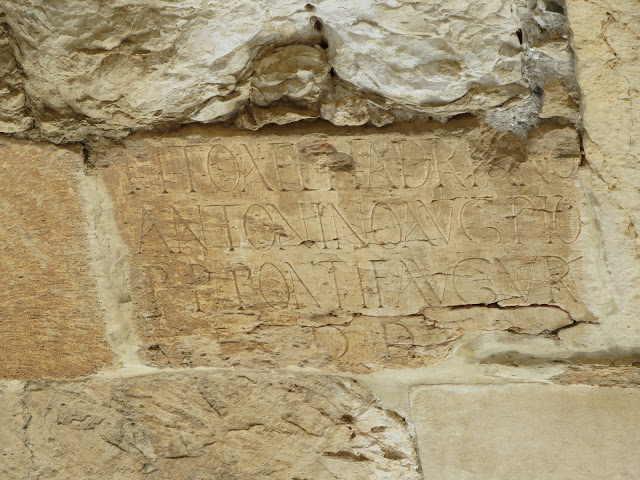 L. F. de Saulcy was the first who published this inscription in 1853 (III 1853, Pl. XXIV). Researchers suppose not without reason that this ashlar originally belonged to the basement of Antonius Pius monument, which was set within the Temple of Jupiter by a Decurions decree of Aelia Capitolina. In 333 the Pilgrim of Bordeaux mentioned two monuments of Emperor Hadrian. Researchers think one of these monuments was honored to Hadrian's successor, Antoninus Puis who continued the construction of Aelia Capitolina.

Umayyad builders extracted this ashlar from the ruins dated to Aelia Capitolina period and used it in their wall course as an ordinary stone block. Whereas they didn't give any value to the inscription of “infidel Francs” didn’t wanted anybody who would visit the Haram esh-Sharif to read this turned upside down writing.

In the meantime, this ashlar has a great historical value. It should be in the museum dedicated to Aelia Capitolina. But there is no such museum in Jerusalem, and nobody intends to establish it. The commanding Templar school doesn't need such museum, it has another purposes.

One cannot say that the Roman period in history of Jerusalem doesn't interest researchers at all. Recently there appear more and more works about Aelia Capitolina: Belayche 1997, Magness 2000, Bieberstein 2007, Friedheim 2007, Mazar 2011, Newman 2014, Janczewski 2016 are among them. Not long ago an Israeli researcher and archeologist Shlomit Weksler-Bdolah released a detailed book: “Aelia Capitolina – Jerusalem in the Roman Period” (2019).

Nevertheless about three centuries of history of the Holy City are still least studied. It is besides the fact that the foundation of the Old City like the Haram esh-Sharif was established precisely in the Roman period, and all further construction continued and developed Aelia Capitolina. A big amount of Latin inscriptions of that period testifies that the city was thoroughly Romanized (Weksler-Bdolah 2019: 201). For a long time, even in Byzantine period, the city's official name was still Aelia. This name in the form of “Iliyā” (إلياء) was transferred to Muslim rulers of the city (El-Awaisi 2011).

The name of the Triple Gate during the early Muslim period is not very much clear. Dan Bahat supposes that Ibn al-Faqih called it the Gate of the Valley (Bab al-Wadi), Nasir Khusraw named it the Gate of the Spring (Bab al-'Ain), al-Maqdisi – Mihrab Maryam Gates (Bahat 1996, 76–78). But none of the Muslim resources mentioned that there is an underground passage in this place, like the one from the Gate of the Prophet (the Double Gate). 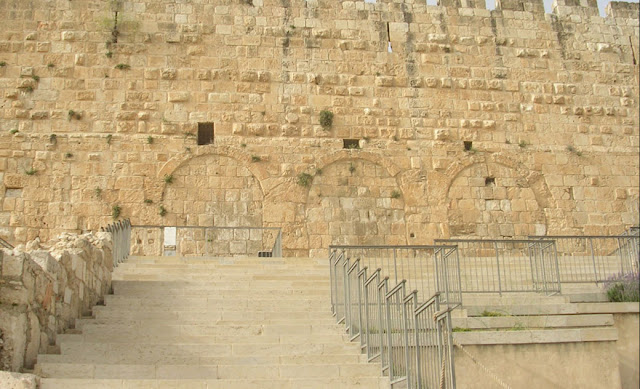 The Triple Gate
Read more...
Posted by https://borisfenus.blogspot.com/ at 1:42 AM 1 comment:

Aerial photo of the Southern Wall of the Haram esh-Sharif. The dashed lines show the borders between the wall rows of different historical periods. The numbers mark different places of interest, which will be described below.

When moving along the Southern Wall eastwards from the south-western corner of the Haram area, it takes a few meters to get to the modern stairs which lead us 3–4 meters higher than the basement of the ancient wall placed on the solid rock. However, during the archeological research the archeologists got the lowest level of the wall standing of the solid rock. Later Israeli organizers of the Archaeological park in Ophel set the stairs and a wooden flooring, to make it easier for tourists and visitors to climb up to the old pavement after the stairs. 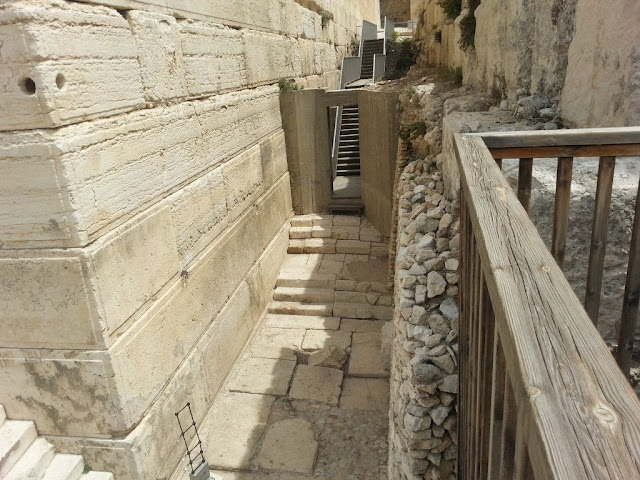 South-western corner of the Haram esh-Sharif 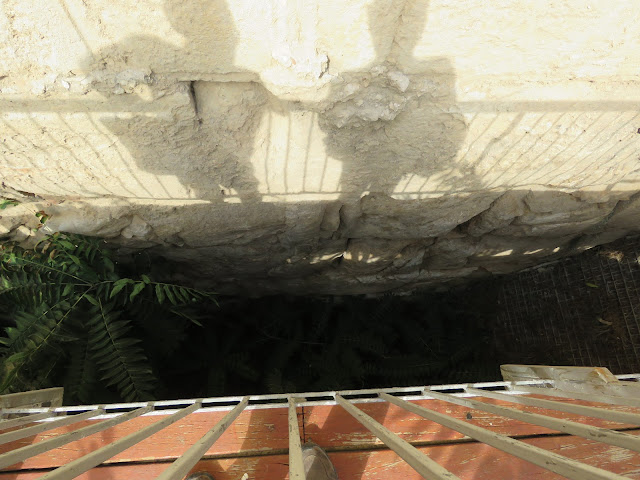 Anyway, the organizers of the park left observable the lower layers of the wall of the Haram esh-Sharif wall through a narrow opening between the wooden flooring and the ancient Haram platform.  In the photo: we are standing over this narrow opening and watching stone blocks below at the foot of the wall. These are huge roughly dressed ashlars laying lower than the exemplary Herodian blocks. But it should be Herodian blocks (if we follow a common version) which made the original courses of the Haram walls! Especially since the southern part of the esplanade is considered as the Herodian expansion of the Hasmonean Temple.

We could stop the excursion at this point as we eye witnessed that the original courses of the Southern Wall is not Herodian. But we didn't come to the Southern Wall to argue with the commanding archeological school and contradict its fallacies (see: Haram area (“Temple Mount”) in Jerusalem: The Origin), but to study this wall. Thus let's get down to our research.

Benjamin Mazar reports that «we found below the estimated level of the sidewalk two rows of stone chambers built in the flood. In the easternmost part, we even found a blocked hole between the two rows, while another hole was a little higher, leading to the next chamber to the east, to the “Double Gate”. Here we came to two conclusions: these chambers were built as a continuous row along the entire length of this part of the south wall» (1970: 54). These chambers were closed and cannot be seen. 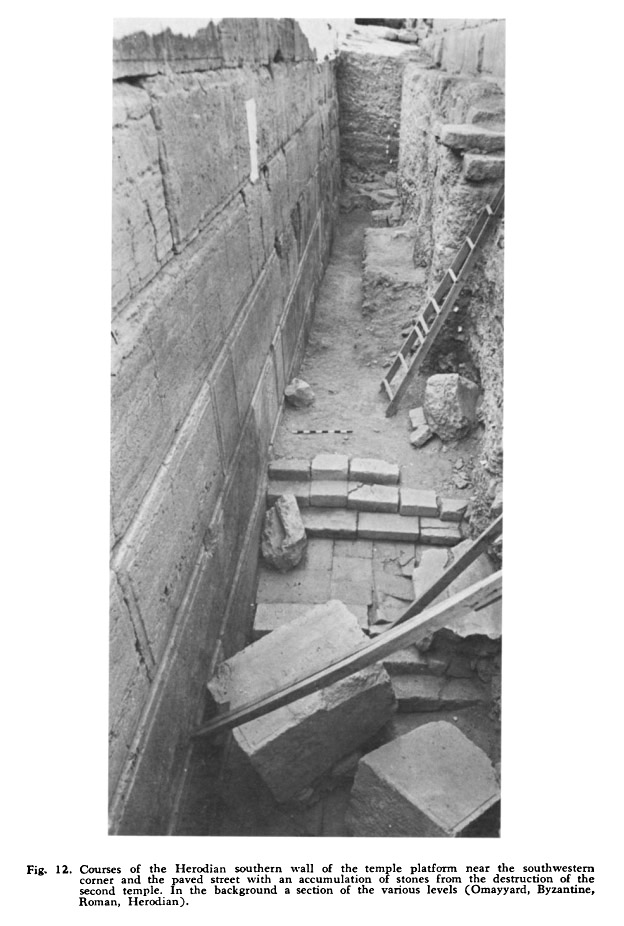 Excavations of B. Mazar at the western part of the Southern Wall (before the discovery of the so-called “Trumpeting Place inscription”) (Mazar 1970: 53)

The old pavement 2.5–3 meters wide saved by the organizers of the Archeological park is stretching along the Southern Wall from the south-western corner up to the fortification (Keep) wall. The pavement consists of flags and stones of different size. One cart could move on this road, but two oncoming carts could not get past each other. 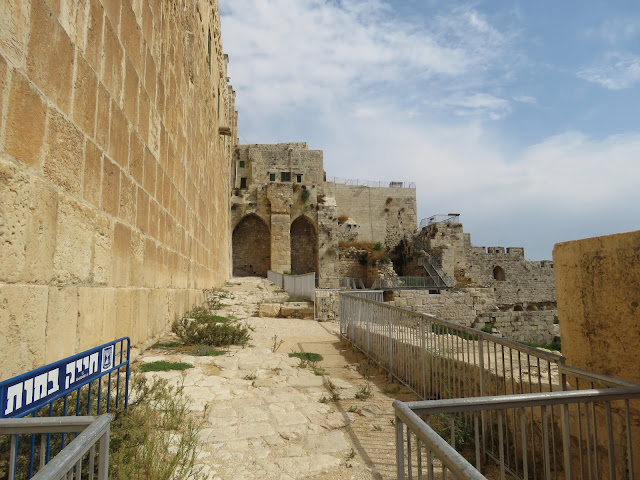 Charles Warren comments this place as follows, «At the southwest angle, and for at least 90 feet along the south wall, we have found a second and less ancient pavement. It is about 20 feet above the first pavement, and about 23 feet below the present surface; it is nearly on a level with the sill of the Prophet's Gateway, and with what appears to have been an old surface under Wilson's Arch... It was under this pavement that the signet "of Haggai, the son of Shebaniah," was found in 1867; and in another shaft at the southwest' angle we have found several fragments of pottery at a depth of about 5 feet below the pavement. Among the fragments are several Greek lamps, one of which has an inscription of Christian origin, similar to those on lamps which have been considered to be of the third or fourth centuries» (1871: 95).

Warren was wrong when dated the pavement 3–4th centuries. He was misled by Christian artefacts, which were found not on the pavement itself, but somewhere away from it. Modern archeological excavations put the things right. As the lower course of the Umayyad palaces lays 3-4 meters lower of this pavement, it should be dated Mamluks times or even Ottoman period. 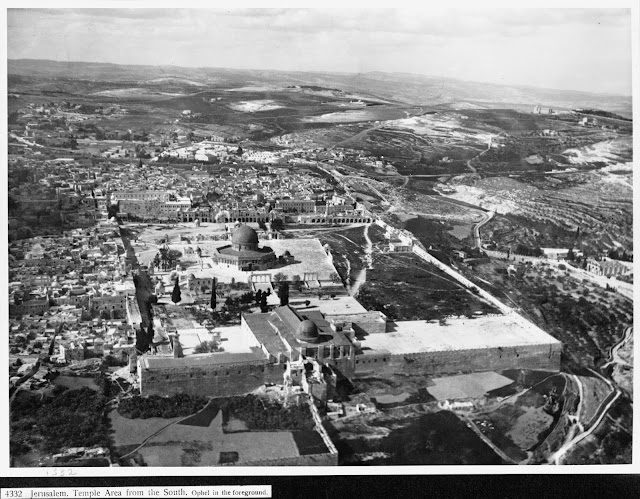 Southern Wall of the Haram esh-Sharif (photo of 1931)

Until 1967 the pavement along the Southern Wall was covered with earth and bushes and wasn't in use during a few centuries.