12. Maqams that were Judaized


C. Clermont-Ganneau described this monument so: “At Yebna we pitched our tent near the wely of Abu Horeira. Inside this we noticed numerous fragments of marble, several stones with the medieval tool-marking, and two marble columns surmounted by their capitals. The outside of the building is rather a picturesque sight, with its lewain of three arches, its cupolas and its courtyard planted with fine trees. The consecration of the Sanctuary to the famous Abu Horeira, "the father of the little she cat," the companion of Mohammed, though it can be and has been disputed, and is certainly spurious, must date very far back” (ARP II 167–168). 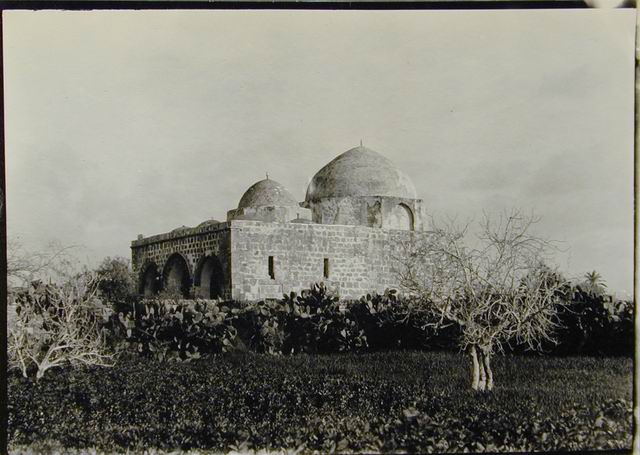 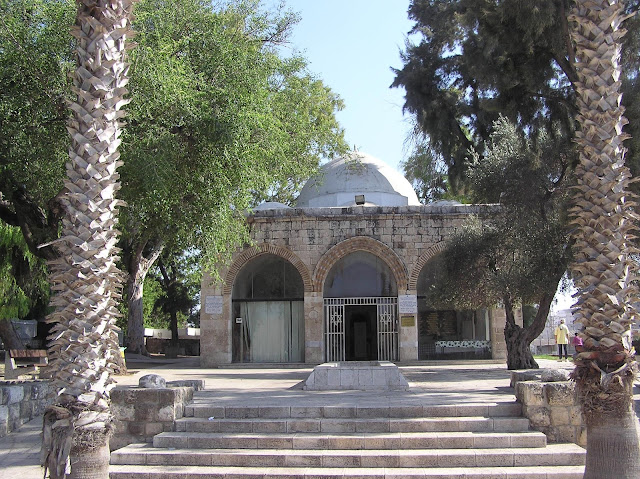 Marble columns with Corinthian capitals can still be seen today. Though the tomb of Abu Huraira has been here since long ago, the existing mausoleum was built in 1293 in a purely Mamluk style and for centuries was the main religious building in Yavne. It consists of two rooms: the front room and the burial chamber, where in front of the mihrab a cenotaph used to stand. Above this room towers the central dome resting on an octagonal drum. Entrance to the burial chamber is decorated with Arabic inscriptions preserved to the present day. One of the inscriptions says – in honor of the Mamluk sultan Baybars. 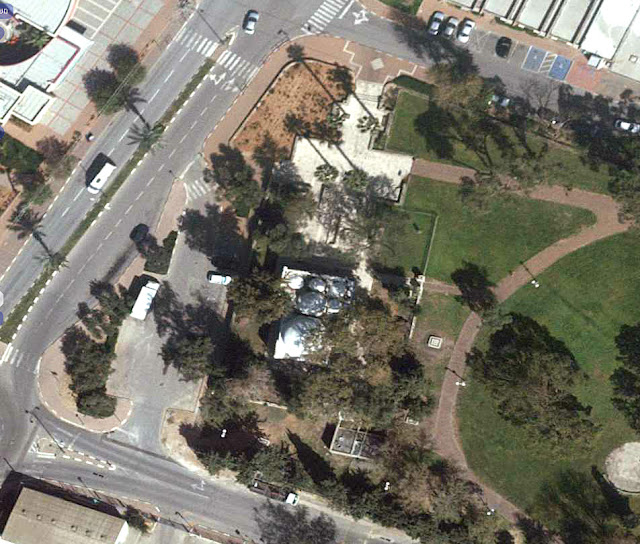 V. Guérin in 1863 found a Muslim cemetery in the yard in front of the mausoleum (Judee II, 57). C. Conder in 1875 saw a minaret located in the north-west corner of the mausoleum (SWP II, 442): The illustrations in the book by C. Clermont-Ganneau and photographs of the early 19th century show that minaret is no longer there. 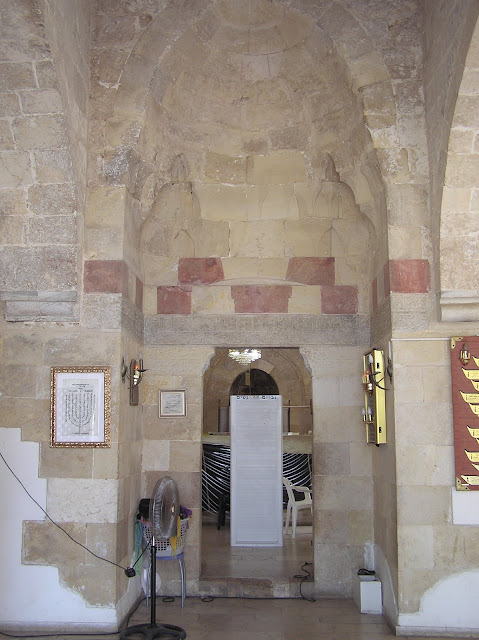 After 1948 the mausoleum was privatized by Sephardic Jews, who rebuilt the Muslim shrine and turned it into a tomb of rabban Gamaliel II. The Muslim cemetery was liquidated and the wall around it was demolished. Instead of a cenotaph of Abu Huraira a gravestone in honor of Gamaliel was set; and a burial chamber was divided into two parts (one for men, another for women) by a partition. 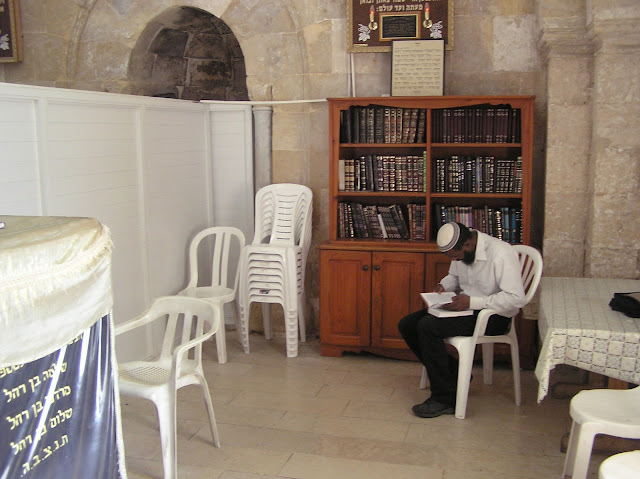 
Muslims know this maqam as the tomb of the prophet Sheman (nabi Sheman). V. Guérin calls it nabi Chema'oun (Samaria II, 356). Jews were correct to identify him with their patriarch Simeon, the son of Jacob, though traditionally it was thought that patriarch Simeon was buried in Hebron. Until 2004 the building stayed in a derelict state but then the Jews decided to appropriate it. For a while there was a struggle for the shrine between Jews and Israeli Arabs: under cover of darkness the dome of the tomb alternately stained then blue, then green. Read about it in the Arabic article “Battle of colors”. 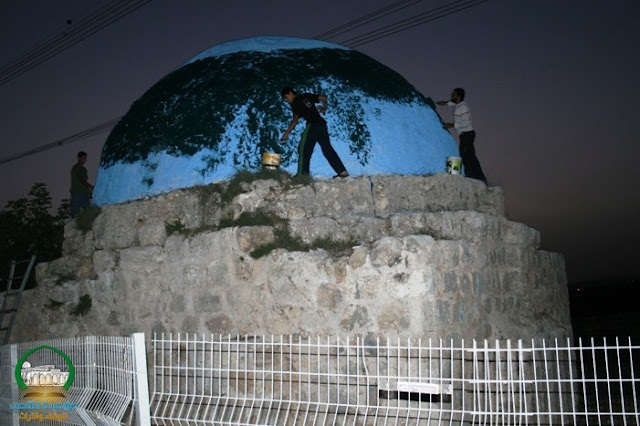 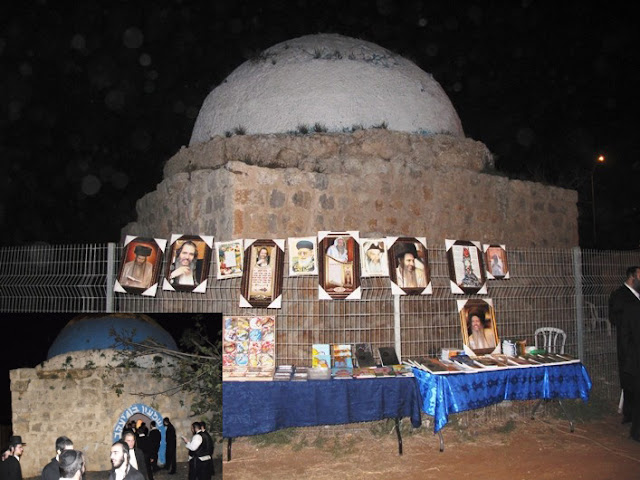 After all, the Jews won. Now the dome of tomb is painted white, a fence with gate is built around the maqam, walls inside are plastered, the cenotaph is renewed and religious literature is laid out on it. A curious fact is that the mihrab is preserved. 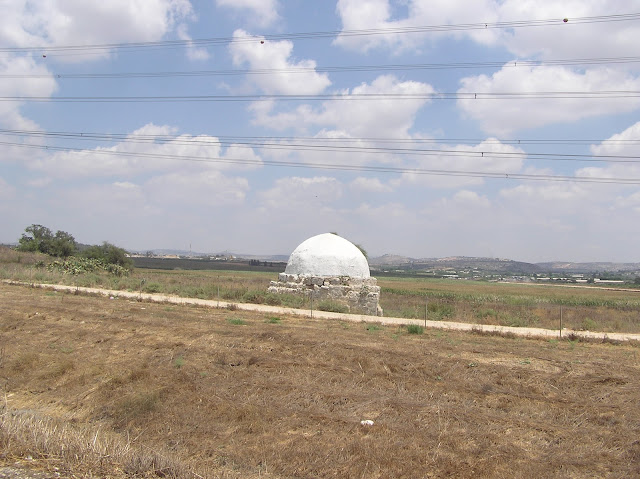 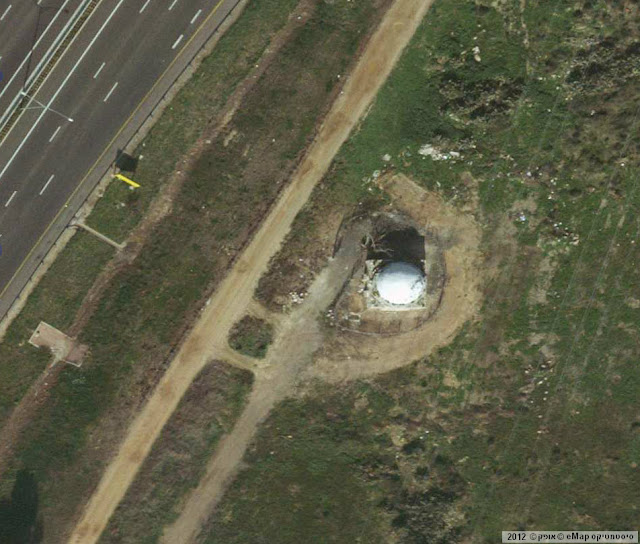 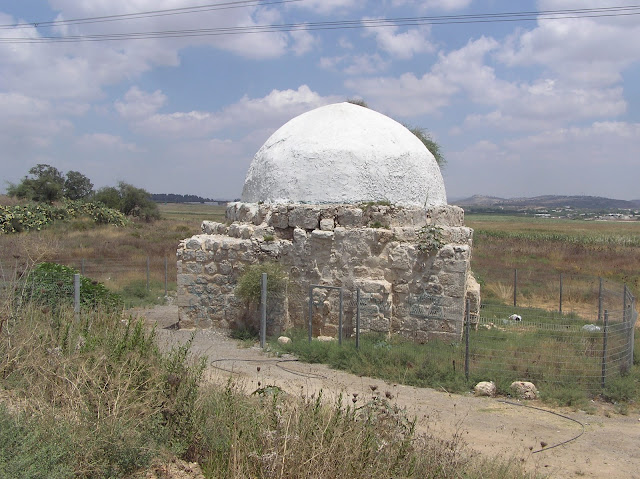 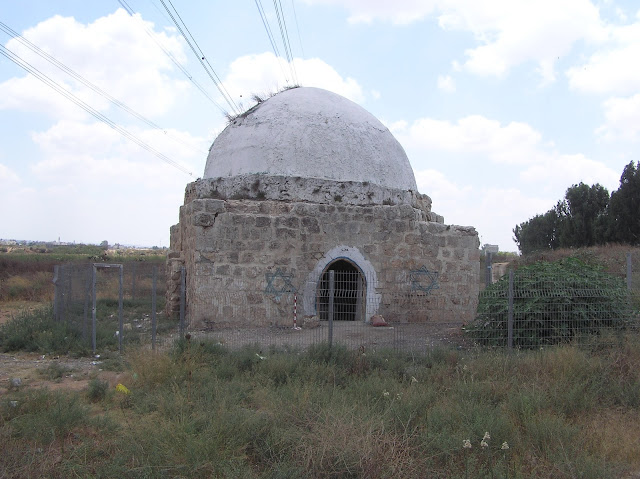 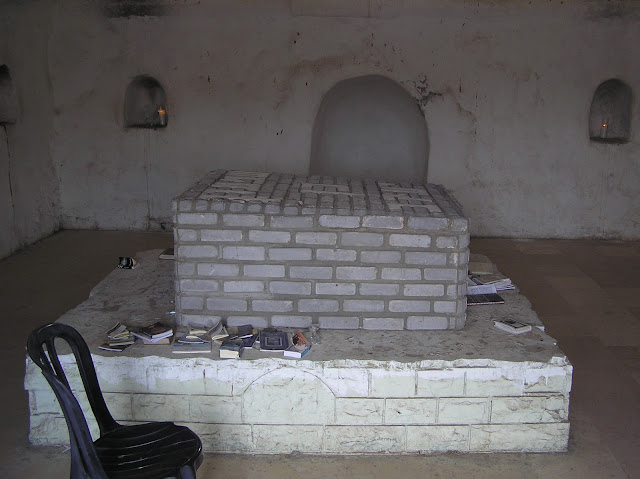 However, the War of shrine is still in progress. Here are pictures of May 2013 (Source): 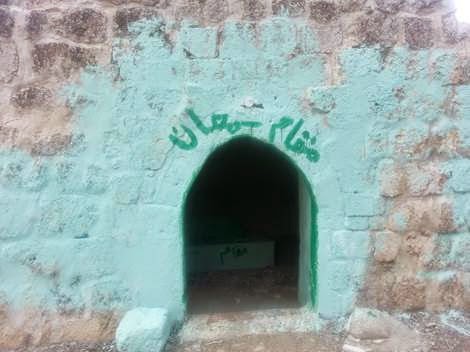 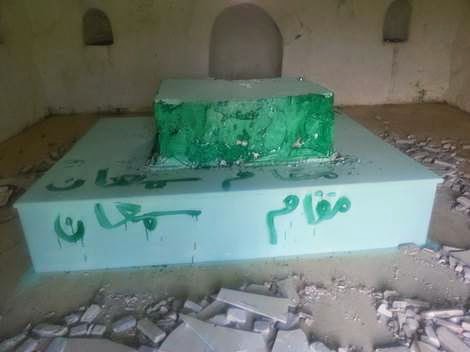 Route. The tomb is clearly visible from the Highway 6, one kilometer to the south of the Eyal Interchange.


This Muslim shrine is also Judaized. Maqam of sheikh al-Gharbawi turned into the tomb of Mattathias, son of Johanan, the founder of the Hasmonean dynasty. In this case, the Jews did not use the Muslim tradition as a base. Mattathias’ name appears here due to the maqam’s proximity to Tel Modi'im, where the Hebraic city Modi'in, the motherland of the Hasmoneans, was once located. The mihrab in the south wall of carefully smeared, two slabs were laid on the stones of the cenotaph; one more slab was added in the head of it with an inscription in Hebrew about Mattathias Hasmonean; a menorah was painted on the wall of the maqam, an icon lamp was hung near it.


View from the west 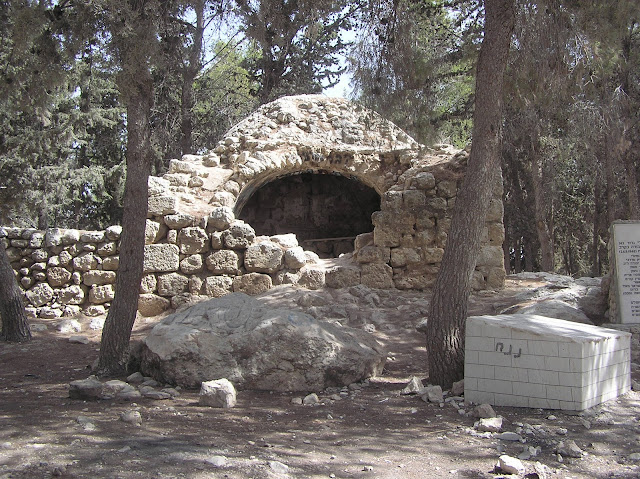 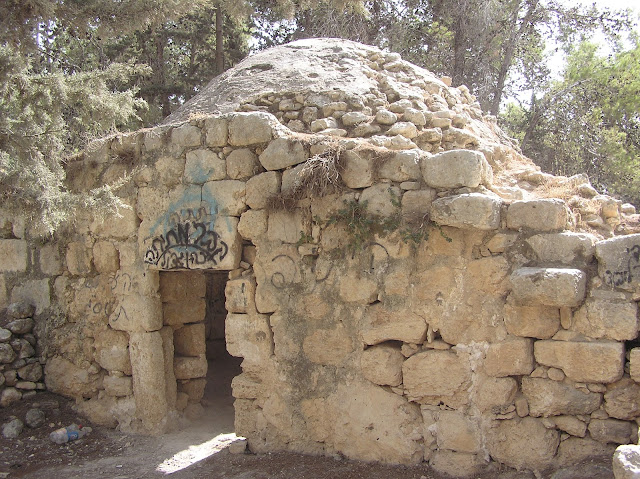 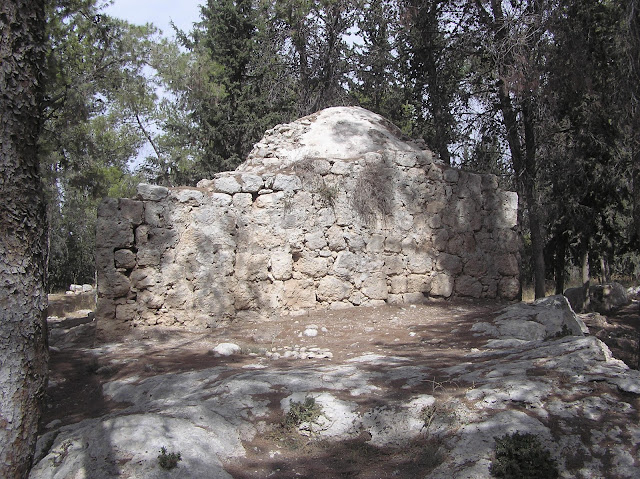 Interior. Smeared the mihrab in the south wall 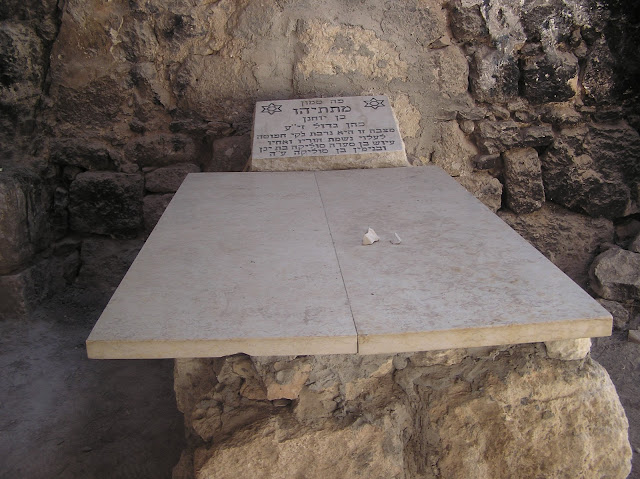 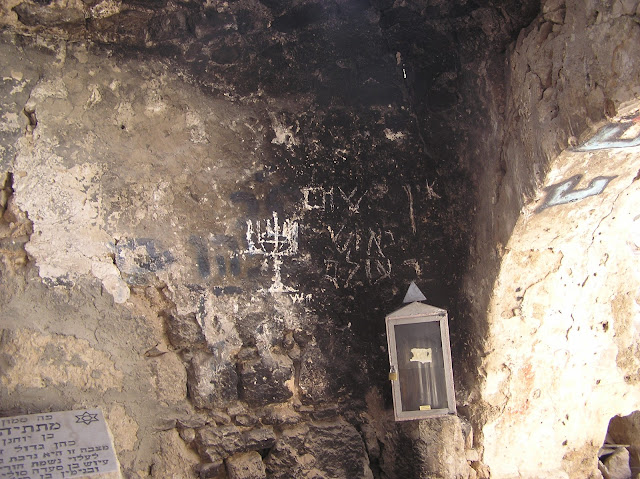 The tomb of sheikh al-Gharbawi was well known to researchers 19th century. C. Conder gave the full name of the Sheikh: Garbawi Abu Subha (SWP II 349). C. Clermont-Ganneau after questioning the locals suggested the name "Sitt Gharbawi" ("Lady Gharbawi"), assuming that the saint buried in the tomb was a female dervish (ARP II 359). I should say that many female hermits are known in the history of Islam, so the honouring of a certain outstanding ascetic is possible. 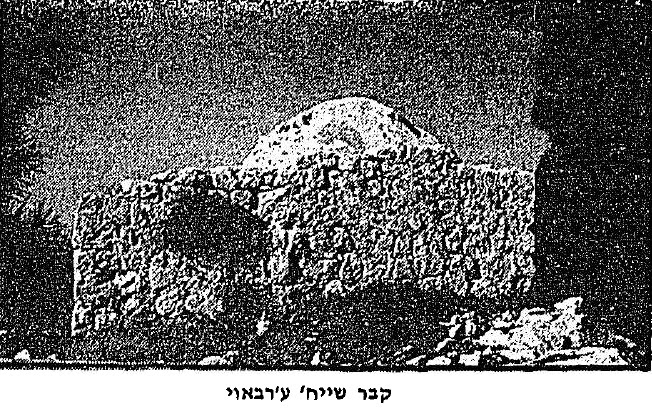 Route. From Highway 443, not far from Tel Modi'im, turn onto a dirt road parallel to Highway 443, which leads to the north, to Hurvat ha-Hardy, and in 700m you’ll reach the required tomb.

The north side of the tomb is adjacent to a large courtyard surrounded by a wall. Beyond this courtyard lie ruins of a monumental building that Palestinian Arabs call al-Qala'a (the Fortress). Excavations started here in the 19th century and are still ongoing. Many researchers believe that here is where the tombs of the Hasmoneans were located. By the way, geophysical explorations have revealed some unexplored cavity under the Maqam of sheikh al-Gharbawi. The detailed results of the excavations see in Hadashot Arkheologiyot.


The map of the excavations taken from there 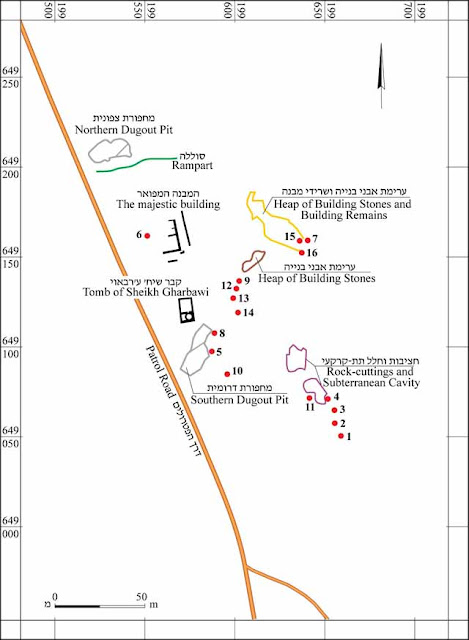 Posted by https://borisfenus.blogspot.com/ at 5:59 AM